News and highlights
Secretary-General of CITES

I would like to express my sincere thanks to the Government of the Czech Republic and the Dvůr Králové Zoo for inviting me to witness the destruction of confiscated rhino horn today – which I understand is the first time such a public event has taken place in Europe. 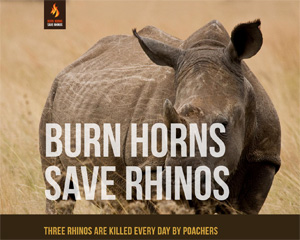 The recovery of the CITES-listed African black and white rhino populations in the wild over the past few decades, after being hunted close to extinction, is a great conservation success story – and for the first seven years of this century poaching levels had remained low at around ten a year.

After 2007, however, a sharp upward trend in poaching started to emerge – a trend that has continued to the point where over 1,000 rhinos were illegally killed for their horn in South Africa alone in 2013 and over 700 killed so far this year.

These disturbing trends cannot be sustained and if they are not stopped this magnificent animal will become extinct in the wild across its range in our lifetimes.

This illegal trade also poses a threat to people and their livelihoods.

In a video produced for CITES by UNTV in 2012, ‘Rhinos Under Threat`, a woman living next to the Kruger National Park in South Africa from where she derived her living made the connection very powerfully when she said ‘they must stop killing the rhinos because it is like they are killing us’.

Distinguished guests, the illegal killing of the rhino must stop.

And today’s important event serves to raise public awareness about the impacts of illegal rhino horn trade and the determination of the Czech Republic and the global community to put an end to it.

The International Consortium on Combating Wildlife Crime - ICCWC, is providing coordinated support to countries and regions in the fight against wildlife crime.

Operation Cobra II, a coordinated global enforcement operation involving 28 countries across three regions was supported by ICCWC and resulted in multiple seizures and arrests, including the seizure of 36 rhino horns.

While this fight requires a global collective effort there are four countries that are central to achieving success in the fight against the illegal trade in rhino horn – the Czech Republic, Mozambique, South Africa and Viet Nam.

I am therefore especially pleased to be here in the Czech Republic and to reinforce the message that we must further enhance our collective efforts to stop these serious and highly destructive crimes.

Distinguished guests, criminal gangs have been operating out of the Czech Republic to recruit pseudo-hunters, and most recently to also recruit professional hunters, to hunt rhino to obtain their horns in order to direct them into illegal trade destined for Viet Nam.

Bilateral and trilateral co-operation between the Czech Republic, South Africa and Viet Nam is critical to ensure that these criminal groups are not able to exploit rhino trophy hunting in this way – and we are encouraged by the increasing levels of cooperation amongst these three States, including through the sharing of forensic samples.

Strong enforcement action is being taken in the Czech Republic, including the apprehension of 16 suspects in July 2013, of recruited hunters, recruiters from crime groups and their assistants, which is also most encouraging.

Giving publicity to such decisive actions sends a clear message to those who trade illegally in rhino horn that they face an ever-increasing risk of detection, prosecution and conviction leading to imprisonment, heavy fines, and seized assets for their illicit activities.

However, more can and must be done by all concerned States and stakeholders to reverse these disturbing trends – and I would like to acknowledge the parallel event that is taking place in the Slovak Republic today.

Distinguished guests, the destruction of confiscated rhino horn today will not put an end to the illegal trade.

However, coupled with the seizure of rhino horn and the prosecution and conviction of offenders, it sends a powerful public message that the Czech Republic does not accept and will not tolerate this illegal trade or the devastating impact it is having on the rhino and on the livelihoods of local communities.

I thank the Government of the Czech Republic for taking this important step and for inviting me to take it with you.