Geneva/Washington D.C., 13 June 2012 – The governing Council of the Global Environment Facility (GEF) has approved a project that will strengthen wildlife forensic capabilities in South Africa to combat wildlife crimes. The US$ 3 million project was developed in cooperation with the Department of Environmental Affairs of South Africa and the United Nations Environment Programme (UNEP), and with the support of the Convention on International Trade in Endangered Species of Wild Fauna and Flora (CITES). The project aims to reduce poaching of rhinoceroses and the illegal international trade in their horns by strengthening enforcement capacity in southern Africa through forensic-based technologies. 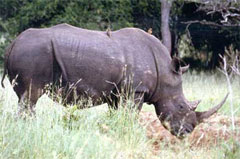 “The poaching of endangered species is a serious threat to the world's biodiversity and it warrants the deployment of all methods at our disposal: better engagement with local communities, improved management of protected areas, and the latest anti-poaching technology to catch those responsible,” said Monique Barbut, GEF CEO and Chairperson. “The GEF is pleased to be working with CITES and the Government of South Africa to protect the rhinoceros. This project reflects our commitment to protecting the world’s biodiversity, whether an obscure plant that holds an important place in the food chain, or this iconic creature of the African savannah.”

The objective of the GEF-funded project is to strengthen law enforcement capacity in South Africa's protected area system through forensic-based technologies focused on the rhinoceros. GEF funding will be used by the Government of South Africa for a dedicated forensic laboratory facility to provide timely DNA analysis of forensic evidence for the prosecution of wildlife crimes, and enhance the existing coordination and information sharing among all actors involved in the law enforcement and anti-poaching efforts in the country and the region.

"This GEF project responds to the immediate threat posed to the survival of two species of rhinoceroses in South Africa through poaching and smuggling, which is often carried out by organized criminal gangs. Without swift action to reverse current trends, the rhino could be driven to extinction during the lifetime of our children,” said Mr John E. Scanlon, CITES Secretary-General. “CITES applauds the GEF for its creative and innovative response to this crisis, which affects not only the rhinos but the ecosystems they inhabit, as well as the jobs and livelihoods of local people.”

The Department of Environmental Affairs of South Africa will be the Executing Agency for the project and UNEP will be the Implementing Agency. Both have greatly contributed to the elaboration of the project.

Rhinoceroses are poached to supply an extremely profitable but poorly understood market. Based upon available information, the demand for rhino horn comes principally from Asia, with the major destination appearing to be Viet Nam. According to a report commissioned by the CITES Secretariat, increasing levels of demand have been fueled by rumours of rhino horn being a cure for cancer, and with the horn being increasingly used in a manner akin to a recreational drug, such as ‘rhino wine,’ to improve male sexual performance, and to treat hangovers and clean the body from ill-effects of the over-consumption of food, alcohol or drugs. None of these uses of rhino horn are recognized in traditional medicine.

In addition, theft of rhino horns from museums, auction houses or at antique or taxidermist shops has occurred in the European Union.  Since 2011, the agency has recorded 56 successful and 10 attempted thefts. Criminals stole horns from museums and private collections in 15 countries, with many of the thefts believed to be linked to an organized criminal group “who are known to use intimidation and violence to achieve their ends." The group is believed to be active in Asia, North and South America and Europe.

In the United States, seven people were arrested on charges of trafficking in endangered black rhinoceros horn in February 2012, as part of “Operation Crash,” a multi-agency effort to investigate and prosecute those involved in the black market trade of endangered rhinoceros horn.

In South Africa, persons from Mozambique and Viet Nam caught trying to smuggle rhinoceros horn out of the country were given long custodial sentences – sending out a powerful message to those who seek to engage in illegal wildlife trade. These convictions reflect the combined efforts of enforcement officials, prosecutors and the judiciary in South Africa where the whole system worked to bring these criminals to justice.

It is clear that the increased levels of rhino poaching and rhino horn thefts has an impact on several continents and that a well coordinated law enforcement response, as well as high-level political responses, will be required to effectively addresses this trend.

There are five species of rhino, all included in the CITES Appendices. The Javan, Sumatran and Indian rhinos are found in Asia and are listed in Appendix I. The first two are considered to be as critically endangered and Indian rhinos as vulnerable by IUCN’s Red List. The Javan rhino subspecies in Viet Nam was declared extinct by WWF on 25 October 2011. A small population of Javan rhinos still exists in Indonesia which has prompted President Susilo Bambang Yudhoyono of Indonesia to declare 5 June 2012 as the start of the International Year of the Rhino.

The number of black rhinos in the wild is estimated at 5,000 individuals and that of white rhinos at 20,000. Both are found in Africa and their range and numbers declined very significantly in the past. Populations then recovered, particularly in Southern Africa which has its white rhino population listed in CITES Appendix II, but a fresh wave of poaching in the past few years is posing a significant threat to this recovery. The western black rhino was also declared extinct in November 2011.

Forensics is the application of natural and physical sciences to the resolution of legal matters. Wildlife forensics is the use of traditional forensic methods in the investigation of crimes against plant and animal species. The scientists in this field use methods that are similar to those used in crimes involving human victims.

Wildlife forensic science applies a range of scientific disciplines to legal cases involving non-human biological evidence. These disciplines include genetics, morphology, chemistry, pathology, and veterinary sciences. Advances in science have made it possible to use DNA analysis for the examination of evidence for a variety of legal issues involving wild animals. The resultant analysis can be used as evidence in the pursuit of criminal prosecution for the case.

The International Consortium on Combating Wildlife Crime (ICCWC) is expected to support South Africa in the implementation of this project. ICCWC comprises the CITES Secretariat, INTERPOL, the United Nations Office on Drugs and Crime (UNODC), the World Bank and the World Customs Organization (WCO). The consortium seeks to ensure that perpetrators of serious wildlife crimes will face a more formidable and coordinated response, as distinguished from the present situation where the risk of detection and punishment is all too low. It also seeks to deploy modern techniques and technologies that are applied in different areas to tackling wildlife crime.

South Africa has developed methods for analysing nuclear DNA from rhinoceros horns. A Rhino DNA Index System (RhoDIS) has been developed and this allows individual rhinoceroses to be identified from horn, blood, tissue etc.  Special sample collection kits and data forms have been developed and widely distributed. Conservation officers and enforcement authorities have been trained in DNA collection techniques to ensure that the chain of evidence is maintained and that information collected can be used in court. Over 4,000 samples have already been analysed and are in the database. Other range states in Africa are also collaborating and there are ongoing efforts include more DNA samples from the continent’s rhinoceros into the RhoDIS database.

The use of DNA forensics in cases of illegal rhinoceros horn trafficking has already proven to be very effective. DNA evidence has been used successfully in a number of rhinoceros-related cases in South Africa and it is routinely forming a part of numerous criminal investigations. International cooperation is bearing fruit as a Kenyan investigation has been aided by DNA analysis.

About the Global Environment Facility

Since 1991, the GEF has achieved a strong track record with developing countries and countries with economies in transition, providing $10.5 billion in grants and leveraging $51 billion in co-financing for over 2,700 projects in over 165 countries. Through its Small Grants Programme (SGP), the GEF has also made more than 14,000 small grants directly to civil society and community based organizations, totaling $634 million. For more information, visit www.thegef.org.

With 175 Member States, CITES remains one of the world's most powerful tools for biodiversity conservation through the regulation of trade in wild fauna and flora. Thousands of species are internationally traded and used by people in their daily lives for food, housing, health care, ecotourism, cosmetics or fashion.

CITES regulates international trade in close to 35,000 species of plants and animals, including their products and derivatives, ensuring their survival in the wild with benefits for the livelihoods of local people and the global environment. The CITES Permit System seeks to ensure that international trade in listed species is sustainable, legal and traceable.

CITES was adopted in Washington D.C. on 3 March 1973. The 40th anniversary of the Convention will be celebrated in March 2013 which coincides with the 16th Meeting of the Conference of the Parties to be held in Bangkok, Thailand, from 3 to 15 March 2013.