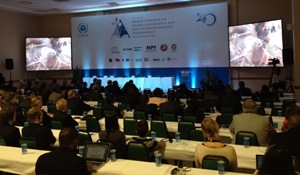 'Rhinos Under Threat' being shown to the UNEP ‘World
Congress on Justice, Governance and Law for Environmental
Sustainability ’ – Emerging Environmental Sustainability
Challenges. Click here to watch the film on youtube.

Geneva, 27 June 2012 – Rio+20, The United Nations Conference on Sustainable Development has recognized in its outcome document The Future We Want the important role of the Convention on International Trade in Endangered Species of Wild Fauna and Flora (CITES).

The outcome document was agreed by the UN Member States on 22 June 2012 and has been described by UN Secretary-General, Mr Ban Ki-moon as having: “affirmed fundamental principles – renewed essential commitments – and given us new direction”.

We recognize the important role of the Convention on International Trade in Endangered Species of Wild Fauna and Flora, an international agreement that stands at the intersection between trade, the environment and development; promotes the conservation and sustainable use of biodiversity, should contribute to tangible benefits for local people, and ensures that no species entering into international trade is threatened with extinction. We recognize the economic, social and environmental impacts of illicit trafficking in wildlife, where firm and strengthened action needs to be taken on both the supply and demand sides. In this regard, we emphasize the importance of effective international cooperation among relevant multilateral environmental agreements and international organizations. We further stress the importance of basing the listing of species on agreed criteria.


"There are now seven billion people consuming biodiversity every day, including in the form of medicines, food, clothes, furniture, perfumes and luxury goods, and our ability to harvest from nature knows no bounds. CITES, adopted back in March, 1973, is needed today more than ever to ensure that international trade in CITES-listed wildlife is legal, sustainable and traceable”, said CITES Secretary-General, John E. Scanlon.

“And for the past 37 years, CITES has put into practice the largest global effort at giving meaning to the concept of the sustainable use of biodiversity, with significant benefits for local communities and the global environment" added Scanlon.

"Today we are also confronting organized criminals involved in the illegal trade in wildlife, which is driving some species to extinction, depriving local people of legitimate development choices, and governments of potential revenue. This illegal trade robs States of their natural resources and cultural heritage and must be stopped.  And we have enhanced our efforts to tackle these serious crimes, including through the International Consortium on Combating Wildlife Crime," said, Mr Scanlon.

Mr Scanlon was in Rio de Janeiro as a member of the Steering Committee of the UNEP World Congress on Justice, Governance and Law for Environmental Sustainability, held from 17 to 20, June (followed by the UNEP side-event on the outcomes of the World Congress on 21 June), which was co-hosted by the Associação dos Magistrados do Estado do Rio de Janeiro in partnership with the CITES Secretariat and others. The Secretariat’s participation in Rio+20 was supported by UNEP through DELC.

CITES used the occasion of Rio+20 and of the events referred to above to:

CITES has been at the cutting edge of the debate on the sustainable use of biodiversity for the past 37 years and it has records of over 12,000,000 international trade transactions in its data-bases for that period – trade which on many occasions has benefitted local communities, such as with the vicuña in South America.

Illegal trade is estimated by some to be worth between USD 5 billion and USD 20 billion per year – illegal activity that is driving many species towards extinction, and depriving local people of development choices and governments of potential revenue.

The International Consortium on Combating Wildlife Crime (ICCWC), a consortium of the CITES Secretariat, INTERPOL, the UN Office on Drugs and Crime, the World Bank and the World Customs Organization has been established to tackle illegal wildlife trade.  It brings together the entire enforcement chain to assist national enforcement authorities and regional bodies to combat illicit trade in wildlife.