CITES conference takes decisive action to halt decline of tropical timber, sharks, manta rays and a wide range of other plants and animals

55 proposals accepted, 9 rejected and 6 withdrawn. Strong enforcement measures to fight wildlife crime
also adopted. Next meeting will be held in South Africa in 2016.

170 governments have turned to CITES to ensure the legal, sustainable and traceable trade in their precious timber and forest products, with the Conference unanimously bringing hundreds of new timber species under CITES controls, along with a number of tortoises and turtles and a wide range of other plant and animal species.  Five shark species and manta rays were also brought under CITES controls following a vote.

The members States declared the 3rd of March as the World Wildlife Day and accepted South Africa’s invitation to host the 17th meeting of the Conference of the Parties to be held in 2016.

The CITES Secretary-General, John E. Scanlon, said: “This is a big day for CITES and for the world’s wildlife.  It takes enormous effort to negotiate treaties and then make them work.  The international community has today decided to make best use of this pragmatic and effective agreement to help it along the path to sustainability in our oceans and forests".

CITES Parties have heeded the call from Rio+20 and recognized the important role of CITES as an international agreement that stands at the intersection between trade, the environment and development.

"Unprecedented levels of international cooperation to combat serious wildlife crime have seen past differences set aside to stop the poaching of elephants and the rhinoceroses for their ivory and horn. These international commitments will now be translated into national action, with the CITES Standing Committee reviewing progress between now and the next meeting in 2016" said Scanlon.

The Asian and African Development Banks, the Global Environment Facility (GEF), the World Bank and the United Nations Development Programme have all attended this meeting in recognition of the need to scale up investment in the implementation of CITES. The CITES member States have decided to explore the possibility of making the GEF a financial instrument for the Convention.

The member States also adopted historic provisions to refine the standards for making scientific findings; determine the State responsible for issuing documentation for marine species harvested in international waters; assess the impact of CITES decisions on the livelihoods of rural communities; and address potential conflict of interest that could significantly impair the impartiality, objectivity or independence of members of the CITES committees.

The Member States, observers and the CITES Secretariat thanked the extraordinary generosity of the Kingdom of Thailand and its people in hosting this meeting and recognized it as a contributor to the meeting’s success.

International trade in a range of rosewoods and ebonies from Asia, Central America and Madagascar will now be regulated by the Convention. Rapidly rising demand for these precious tropical hardwoods has led to serious concerns that unregulated logging is depleting populations of already rare species. Range States, including the host country, Thailand, believe that regulation under CITES will help them manage these valuable resources more sustainably.

The joint programme between CITES and the International Tropical Timber Organization (ITTO) will support the efforts of the countries concerned to strengthen their capacities to implement the Convention.

Cross-border movement of wooden musical instruments was also addressed during the meeting. Special procedures under CITES have been agreed for musicians and institutions travelling with musical instruments containing precious woods such as Brazilian rosewood, and other productes of species listed by the Convention. 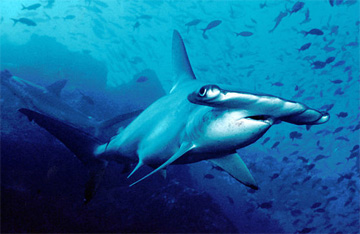 The meeting reached a climax today after an attempt to reopen the debate on these species in the closing Plenary was narrowly defeated. The Parties confirmed a decision made by one of the Conference’s Committees earlier in the week to include five commercially valuable shark species in Appendix II. The oceanic whitetip (Carcharhinus longimanus), scalloped hammerhead (Sphyrma lewini), great hammerhead shark (Sphyrna mokarran), smooth hammerhead shark (Sphyrna zigaena) and the porbeagle shark (Lamna nasus) are harvested in huge numbers for their valuable fins and, in some cases, meat. From now onwards, they will have to be traded with CITES permits and evidence will have to be provided that they are harvested sustainably and legally. These listings mark a milestone in the involvement of CITES in marine species.

In the Committee meeting, the oceanic whitetip shark (proposal 42) had been adopted by 92 votes in favour, 42 against and 8 abstentions after a secret ballot. Colombia introduced the proposal, supported immediately by co-proponents Brazil and the United States of America. Those against the listing argued that regional fisheries management organisations (RFMOs) were best placed to tackle the decline in shark stocks.

Brazil then submitted proposal 43 to list three species of hammerhead sharks. The scalloped hammerhead shark occurs widely in coastal warm temperate and tropical seas and is exploited extensively for its fins. The proponents highlighted the significant declines in the population of the species that have been reported in many areas, and it emphasized the importance of the outcomes of the Rio+20 summit last year for better protection of marine species. Two other species of hammerhead sharks (the great hammerhead and smooth hammerhead) have similar fins that are hard to distinguish in trade, and the proponents, recommended that these too be subject to CITES trade controls. The proposal was adopted by secret ballot with 91 votes in favour, 39 against and 9 abstentions.

After two unsuccessful attempts at previous CITES Conference meetings, the proposal to list the porbeagle shark (proposal 44) was also adopted by secret ballot with 93 votes in favour, 39 against and 8 abstentions. Ireland, on behalf of the European Union Member States and Croatia, presented the proposal and announced an implementation package of EUR 1.2 million to assist developing countries in the implementation of the listing of this and other marine species. The proponents welcomed the impressive alliance of countries co-sponsoring the proposal and argued that requiring CITES export permits will ensure that international markets are supplied by fish from sustainably managed fisheries that keep accurate records. This species has experienced severe population 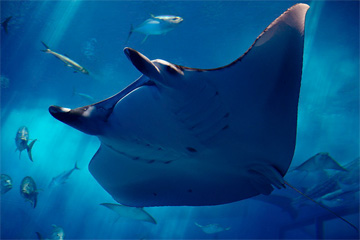 declines, notably in the northern Atlantic ocean and the Mediterranean, owing to unsustainable fishing for its high-value meat and fins.

Ecuador introduced proposal 46 for the inclusion of manta ray species in Appendix II. The proposal was adopted, again by secret ballot, with 96 votes in favour, 23 against and 7 abstentions. Manta rays are slow-growing, large-bodied migratory animals with small, highly fragmented populations. They have among the lowest reproductive rates of any marine animals, with females giving birth to only one pup every two to three years, making them extremely vulnerable to overexploitation. Most known populations are small in size, although there is an exceptional population of one species in the Maldives, estimated at 5,000 or more. Manta gill plates fetch high prices in international markets and have been traded in significant numbers in recent years.

Strategic decisions were adopted for the first time about on-the-ground actions to collectively address the elephant poaching crisis and the escalating illegal trade in ivory. A unprecedented united African front, setting aside divergences, to address this crisis.

The general 'rules of the game' for trading in elephants or elephant products were thoroughly revised, modernized and strengthened up (e.g. addressing e-commerce, systematically using forensics, monitoring ivory stockpiles, controlling live elephant trade, dealing with countries that are persistently involved in illegal trade in ivory, etc.)

A suite of targeted actions focusing on the 30 countries mostly involved in or affected by the illegal killing of elephants and the illegal trade in ivory. An agreement to continue debating future of trade in ivory, and keep management options open was also reached.

An agreement was also adopted to strengthen the African Elephant Fund and the African elephant action plan.

The Conference also requested Parties concerned to prosecute members of organized crime groups implicated in rhinoceros related crimes under a combination of relevant legislation which carry appropriate penalties that will to act as effective deterrent. Those countries should submit rhino horn samples from seized specimens, to designated accredited forensic laboratories.  Countries were also asked to consider stricter domestic measures to regulate the re-export of rhino horns products from any source and develop and implement demand reduction strategies aimed at reducing the illegal movement and consumption of rhino horn products.

Member States have agreed to develop and implement strategies to enhance community awareness of the economic, social and environmental impacts of illicit trafficking in wildlife and convene a CITES Rhinoceros Enforcement Task Force to develop strategies to improve international cooperation.

The Conference decided to establish Wildlife Incident Support Teams (WISTs) consisting of enforcement staff or relevant experts, to be dispatched at the request of a country affected by a significant poaching incident related to illegal trade or that has made a large-scale seizure of CITES listed specimens, to assist and guide appropriate follow-up actions in the affected or intercepting country, in the immediate aftermath of such an incident.

Range States were requested to organize national seminars in Appendix-I Asian big cats, involving all relevant enforcement agencies, to promote a multi-disciplinary approach that will facilitate improved coordination and cooperation in the detection, investigation and prosecution of wildlife crime offences.

An agreement was also reached to undertake a study on Cheetahs to determine how best to address the alleged illegal trade in live specimens. Better rules were adopted to refine the leopard trophy hunting system.

Learn more about CITES by visiting www.cites.org and CoP16 decisions by visiting /eng/cop/index.php  or connecting to: