“This second Operation COBRA initiative shows what can be achieved when law enforcement authorities across range, transit and destination States work together in a coordinated manner. It also serves to highlight that intelligence-led operations are essential in the fight against transnational organized wildlife crime,” said Mr Scanlon. 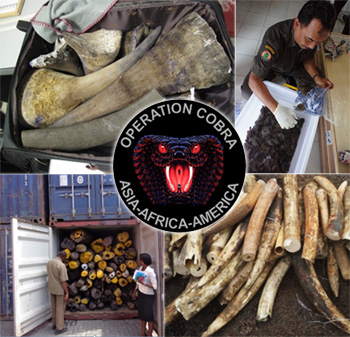 “I would like to take this opportunity to congratulate the organizers, supporters and, most importantly, the authorities involved in Operation COBRA II for its successful conclusion. I also encourage the officers who participated in the operation to continue to combat wildlife crime in a collective manner, drawing upon the new professional relationships they have established with their counterparts from other regions of the world,” added Mr Scanlon.

Operation COBRA II was organized by the Lusaka Agreement Task Force (LATF), China, the United States of America, South Africa, the Association of South East Asia Nations Wildlife Enforcement Network (ASEAN-WEN) and the South Asia Wildlife Enforcement Network (SAWEN), and was coordinated by International Coordination Teams located in Nairobi and Bangkok. The operation focused on key species that are subject to illegal trade, and resulted in a large number of arrests and the seizure of specimens from cheetah, elephant, rhinoceros, pangolin, leopard, rosewood, snake, tiger and turtle, among others.

The International Consortium on Combatting Wildlife Crime (ICCWC) delivered a two-day training workshop to officers and representatives from wildlife enforcement networks that participated in Operation COBRA II, prior the operational phase of the operation. This included training on the use of tools and services available to them through ICCWC partner agencies (see:  /eng/news/sundry/2013/20131104_iccwc_training.php).

See also the press release issued by the organizers of the operation.

With 179 Member States, CITES remains one of the world's most powerful tools for biodiversity conservation through the regulation of trade in wild fauna and flora. Thousands of species are internationally traded and used by people in their daily lives for food, housing, health care, ecotourism, cosmetics or fashion.

CITES was signed in Washington D.C. on 3 March 1973. The 40th anniversary of the Convention will be celebrated in March 2013 which coincides with the 16th Meeting of the Conference of the Parties to be held in Bangkok, Thailand, from 3 to 14 March 2013.
Learn more about CITES by visiting www.cites.org or connecting to: