This section focuses on the sharks and rays listed by CITES and on the ongoing efforts to implement these decisions. 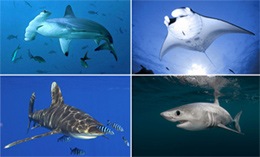 At CoP16, CITES Parties decided to include five shark species and all manta rays in Appendix II. The listing of manta rays and of five species of sharks have entered into effect on 14 September 2014, to give Parties 18 months to resolve technical and administrative issues related to implementation.

At its 17th meeting, in Johannesburg 2017, the Conference of the Parties decided to include silky shark (Carcharhinus falciformis), thresher sharks (Alopias spp.) and all nine devil ray species (Mobula spp.) in Appendix II. With the other eight shark species previously included in Appendix II, twelve species of sharks were included in Appendix II. The listing of devil rays entered into effect on 04 April 2017 while the listing of other four shark species will enter into effect on 04 October 2017, by a delay of 12 months.

While commercially-exploited aquatic species have been included in CITES Appendices over the years, these recent listings set new challenges and opportunities for Parties in ensuring that trade is legal, sustainable, and traceable, even for highly traded fisheries commodities.

Which sharks and rays were listed by CITES at CoP17 in 2016?

What are the other sharks included in CITES Appendices?

History of shark listing by CITES

CITES Resolutions and Decisions on sharks and rays